Sue Uff was a member of the British Team for the European Veterans Championships at all three weapons.

Her teams finished 2nd in the Sabre, 3rd in the Foil and 6th in the Epee

Sam Godbehere 14th in the Men’s Epee B Championships

Will Osborne 5th in the Men’s Epee

Senior World Cup Barcelona Georgina Mitchell won three lost three to be seeded 120 out of 269. After losing her 256 fight she finished 175th.

BUCS Modern Pentathlon Championships
Georgina Mitchell won the over all event finishing with 17 victories and 3 defeats in the fencing, and her team, Loughborough Uni Women’s, came second to Bath Men’s A.

Sue makes it into the papers!

Occasional club attendee Florin Mirica took the bronze medal in the Boy’s epee at this European Circuit under 17 event. An excellent result in a field of 106 from 13 countries.

On the Sunday he, and some of his friends, then went on to take Gold for Romania in the team event.

Sue Uff took the Silver medal in the 70+ women’s epee despite being seeded 10th after the pools.
She beat the higher seeded German 10-9 in the last 16, a French woman 10-7 in the last 8, an Australian 10-8 in the semi before going down by one hit to the number 1 seed (From Finland) in the final. 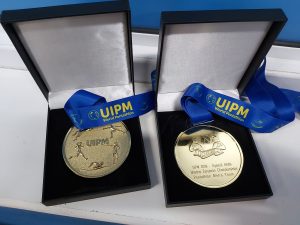 Ed Norton won gold in the 30+ section of this Pentathlon Event, getting best fence across the whole competition (only dropping 5 hits).
He also gets Gold in the team competition and Silver in the men’s relay event. 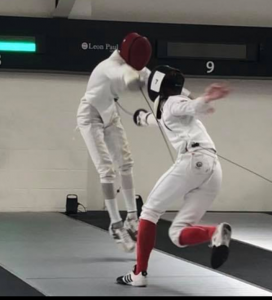 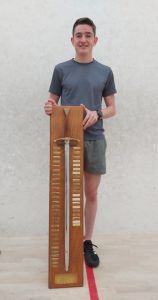